On Saturday 28th May 2011 I was at the Pigstock Fest in Killinchy Co. Down.  While checking out the best this festival had to offer I decided to head to the Main Stage to check out The Burnt Reynolds but there was a problem. Everyone seemed to have disappeared. The band put a call out for everyone to move forward. After a few minutes of little to no movement they declared that the song was for the two randomers sitting in the grass.

Where was everyone? After about ten minutes of wondering I came across the Engine Room where a huge crowd had gathered. I was intrigued so I stood and waited with the rest until a band appeared.

Now, before I comment further this is how these boys came out to the gathered fans:

I couldn’t believe my eyes. What had unfolded before me? It was Mental Deficiency. 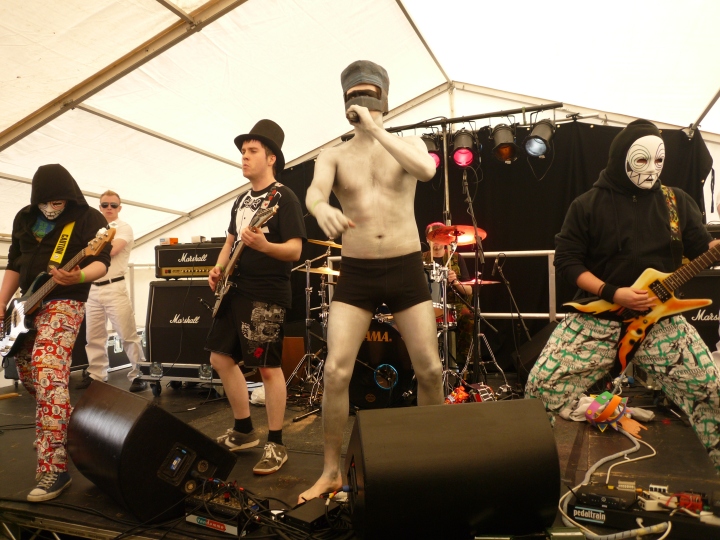 How to describe Mental Deficiency? It’s like being slapped in the face with a DVD Boxset while taking a comic up the bum. Is it Metal? Is it Rock? All I can say is that it is Fucking Awesome. With song tributes to the likes of Robocop and Aliens these boys hit you harder and faster than a DeLorean at 88mph. Although anyone who thinks that these guys aren’t serious about their music, it quickly became clear that some of the most talented musicians I had seen that day were on this very stage. 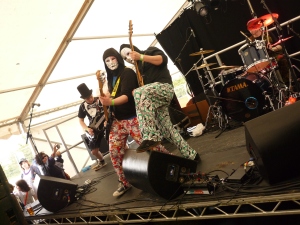 Masked Brothers Bassface and Shredhead play like they were born with instruments already attached. Alex Kazam plays Guitar masterfully with a sleight of hand David Blaine would kill for. Sgt. Marmaduke thunders the skins like an artillery attack. All the while frontman Mr. Majestic struts across the stage and through the crowd with all the confidence and menace of Godzilla trampling Tokyo. An awesome sight that has the crowd thrashing, shouting and going absolutely, well, Mental.

When it came to their final song it seemed like the crowd were anticipating something special.  The chant for ‘Get her home, Get her bucked’ rippled through the crowd like a Tsunami and the band dutifully obliged. The roof of the tent nearly blew off as they boys launched into one of the most 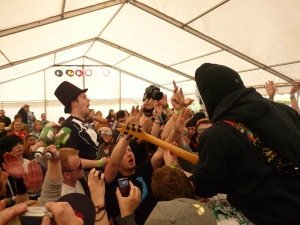 immersive and interactive songs ever heard, to the squeeling delight of those packed into the tent. AlexKazam and Shredhead were hoisted onto people’s shoulders and played from the centre of the audience as Majestic tried to sing over the combined voices that accompanied him.

They finished to a cheer that echoed all the way to Mordor and all that was left were panting fans and a sizeable queue looking to get hold of a Get Her Home Get Her Bucked T-Shirt.

This is the most exciting band I think I have ever seen and indeed the most excited crowd I’ve been a part of since I queued at the Odyssey for New Kids On The Block. Mental Deficiency don’t just stand and serenade the crowd, they hold them down and sexually assault them (in a good way). Pigstock, if you’re listening, get them a bigger tent next year…and councellors on standby.

Even writing this review has left me out of breath reliving the perpetual flashback. I’m off for a cuppa to calm down.

One thought on “Lunatics Running The Asylum”