Title: THE WAY BACK

The story is told through the eyes of Polish prisoner Janusz (Sturgess) as he finds himself thrown into a Siberian Gulag on the testimony of his wife, obtained under torture by Stalin’s men. Sentenced to 20 years he is thrown into a world of turmoil and pain. A world where kindness can kill.

A small group of prisoners, out of desperation and necessity, band together to make their escape. Little do they know that Communism will be harder to escape than they think and that beyond the 1000 miles of Siberian wilderness is another 3000 miles to freedom.

As they battle through beautiful desolation they traverse the harshest terrain on the planet facing certain death with every step. It is only after they are joined by innocent waif Irena (Ronan) that the humanity lost in the harsh prison world is slowly reawakened.

The Way Back is a visually stunning film as Director of Photography Russell Boyd takes us from icy Siberian Wilderness through snowy forest, empty desert and eventually to the Himalayas. The scenery is as engaging as the story reflecting t 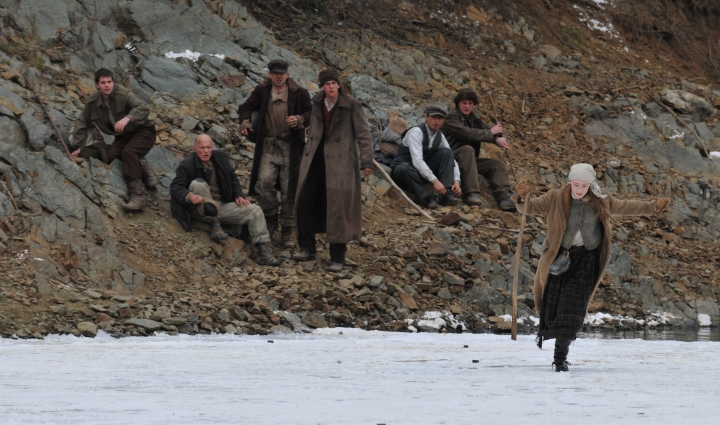 he desperation in the characters with the sparsity of features. The conflicting colours of each terrain changes along with the character of each of the men as they fight for survival against the elements. The Siberian landscape is a dark and empty world for dark and empty hearts as the men retain the ethos of prison life  Colours brighten as they slowly start to rely on each other when they have spent so long living with no-one to rely on but themselves.

The outstanding ensemble cast, led by the infallible Ed Harris, keep the story grounded with the emmense combined talent on show here. Harris is Mr Smith is the inevitable gruff loner who trusts no-one. As usual there is a heart there to be found, especially when they are joined by Irena, played by the fantastic Saoirse Ronan taking another step on her meteoric rise to fame. Ronan and Harris easily portray two lost souls who form an uneasy friendship in adversity. Mark Strong makes a short but memorable appearence as Khabarov, Janusz’s first friend in the Gulag. Strong plays this with the usual menacing and untrustworthy undertone that always leaves you questioning his integrity. Unfortunately the weak link in the cast is Colin Farrell who plays career criminal Valka. His acting here harks back more to ‘Bullseye’ in Daredevil, a role any Farrell fan would surely wish to forget. This is only compounded further by a rather half hearted story arc that tries to soften his harsh exterior at times but to no real effect.

The stand out performance of the film is definately Sturgess. With the combination of innocence and a forced and de facto leadership role placed upon him by the group, he is able to show a great range of talent as the conflict inside is evident throughout. It is, through every beat, his story and he lives up to it with fantastic emotion often seen in a fleeting glance or moment of weakness. While Saoirse is a very talented actress it is Sturgess who comes out as the rising star of the film and is certainly a young man with a very bright future ahead of him.

Director Peter Weir does a great job combining the scale of the surroundings with a rather intimate story about perserverance and the determination of man. The only problem is that at times, in order to move the story on, it becomes a little flitting with quick cuts from explanation of a plan to the men after completing the plan without showing the actions that got them there. I understand that he has 4000 miles to cover in a little over two hours but it takes away some of the urgency of the characters plight.

The Way Back is a beautifully shot and thoroughly entertaining film that is definately worth a watch.

The Way Back is out on DVD and Blu-Ray on 9th May.