As we walked along the cobbled street, admiring the stunning architecture of such a beautiful city, my eyes couldn’t help but wander. The paradoxical clash of worlds so far apart is an intense experience to say the least. Every building stunningly designed and crafted so many years ago, the character of the tiny cobbled streets, the unique smell that hangs on the corner of any quintessential European City and of course the fat Asian prostitute staring back at me.

When I told people I was taking my girlfriend on a New Year trip to Amsterdam it seemed to elicit similar responses from all quarters. Anyone who hadn’t been would ask if I would be getting high or fucking prozzies to which my answer would be neither. People may ask why anyone not interested in partaking in these past times would go to a place like Amsterdam. I wanted a city break and had heard so many good things about the place from reports of debauchery to recommendations of a romantic setting for any couple looking to get away for a weekend. So I booked it. A romantic getaway with a chance to look at whores. What more could you want?

Those who had already sampled this particular destination also had similar outlooks on certain aspects of the city. The one overriding attitude was about the world famous Red Light District. The most beautiful women you’ll ever see… there for the taking… waving, luring, enticing. Their descriptions threw up images of Sirens, the beautiful seductresses in Greek Mythology who used their beauty and the enchantment of their angelic voices to lure unsuspecting sailors to their doom. I was intrigued.

So the decision was made, I would spend some time in the Red Light District… in the name of research… I would sacrifice my innocence for Panic Dots…that’s my story and I’m sticking to it. Needless to say my eyes were opened and, unfortunately for you my friends, yours shall be too.

My first experience of the Red Light District, in the De Wallen district of Amsterdam, was during the day. I thought it would be best to get a sense of the place in daylight before t

ackling it in full blown night mode. The area looked similar to any other part of the city, the only noticeable difference was the appearance of sex shops and peep shows. They looked like something out of a 1980’s John Candy movie. Dirty, seedy and with pictures of the show on display although anyone could tell by the hairstyles that they were taken decades ago. Too many blonde perms accompanying a black bush. We continued down the side streets until the next canal and turned to walk down the main thoroughfare and past my first occupied window.

I was almost nervous by this point. My first sighting of the rarity that is a woman both beautiful, semi naked and interested. Well let me tell you, she wasn’t any of these things. She was over forty, sporting the haircut of a ten year old boy and texting. She looked up with deadness in her eyes and then returned to her mobile. Jesus, there was more life and soul in Anne Frank’s attic.

So, my first look was a disaster. I almost felt rejected by a prozzie. She should be interested in anyone with a wallet and she dismissed me with a look. Don’t get me wrong, I wasn’t looking anything but it would have been nice to be offered. I began to wonder if there was some sort of day/night shift thing going on where maybe the munters cover the day and the Goddesses only come out at night like some sort of nocturnal mirage. Off to fill the day with touristy stuff and try again later.

By night it looks a

lot different. The lights are on and someone’s home. The streets are packed with people from pervy loaners through groups of lads to couples with prams. The area doesn’t just feel as seedy and has more of a novelty flavour that everyone seems to enjoy. Although the strange thing is that a lot of windows appear to be empty. It’s not the sea of women filled windows that most people imagine. There is maybe a girl in one out of five windows and once again they aren’t that pretty. I can’t fathom if it’s something to do with Dutch genetics or eating habits but even the ‘skinny’ women have an oddly shaped pot belly. Now don’t get me wrong, I’m no size zero advocator but I’m sure when you’re paying for it no-one wants a fatty and here there’s more bellies than a Buddhist temple.

As we walk along the windows there is a noticeably common theme. Yes they are prostitutes, yes they are semi naked and yes they are waving you in but there isn’t one who hasn’t a phone, fag or box of Pringles in their hand. Just what you want, cheese and onion breath. Behind t 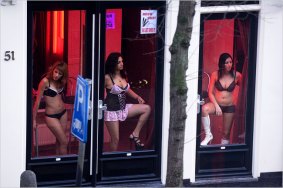 hem you can see the room that they rent for the job and it just may be the most depressing site I have ever seen in my life. It looks like a dentists with a mattress at the back and a box of wipes. If it’s not the drugs that would rob you of your erection, it would be this.

Oddly enough the paradox returns as we soon end up at the old church which the district surrounds. It is a strange sight to have a church on one side of you and a row of fat Asian hookers on the other and for some reason all those around the church seem to be fat and foreign. I began to wonder if the place was split into ‘worlds’ like a theme park. This was Fat and Foreign World, beside Blonde with a Belly World, adjacent to Minging and Manky World. Thin and Stunning World must be closed for repairs.

My red light experience was going off the rails fast. Were all those who went before me blind or just desperate? Or was it just a whole lotta male ego going on? Desperate times call for desperate measures, time for a live show.

My brother had recommended one in particular and I thought that maybe it would save my experience although at 45 Euro a ticket it better had. Thankfully that included 4 free drinks a piece or it would have been shockingly expensive for a bit of filth.

The Casa Rossa was a strange loo 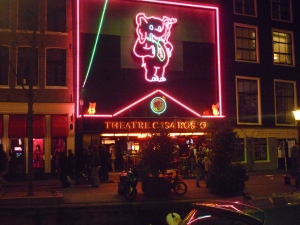 We moved up to the kiosk where a rather pervy looking old man took our tickets and replaced them with 4 pieces of torn paper each (1 per free drink) and a penis shaped lolly before ushering us inside. The interior reflected the exterior and it also looked like an old converted cinema. I was expecting the crowd to be full of old men in long coats rummaging in their pockets however, surprising as it may sound, there were mainly groups of giggling girls, rowdy young fellas and couples.

German Trance Music reverberated around the room as everyone waited for the curtains to open. Drinks were ordered and we sat wondering what sight would greet us when the show started. It wasn’t long before we found out. Now I have been over this in my mind many times. How to describe the sight on the stage? A rather large, muscle bound male on his knees barely dressed as a soldier with a blonde female wearing a camouflage cap and army trousers lying on the floor sucking his cock while the heavy Bass of hardcore techno vibrated the floor.

After about ten minutes of heavy pounding the DJ asked us to thank Derek and his beautiful Girlfriend Brenda and the curtains closed. Poor fella didn’t even get to blow his beans. Finally our drinks arrived and not a moment too soon.

The curtains opened once more, the Pirates of the Caribbean music started and a stripper entered dressed as Captain Jack Sparrow. Not exactly top of my fantasy list but whatever. She danced, stripped and masturbated. This pattern carried with 3 different girls. Now I don’t know if the strippers were suffering a spate of inner ear infections but they had all the balance and grace of a Hippo on a unicycle. Dancing like your fat aunt at a wedding is not a turn on and certainly wouldn’t be the usual skill set for a stripper.

By this point it was getting a bit boring. We were just about to give up on the show until the Jungle Drums started. A stripper came out dressed like some sort of Island girl, stripp

ed (surprise, surprise) and then pulled three guys onto the stage. After a bit of dancing(?) she formed a conga line which was soon joined, to the surprise of the punters who had been trailed up, by a guy in a monkey suit with a large fake cock on the front. I started to think my drink was spiked. Even more so when the monkey walked to the front of the stage, played with the fake cock and spunked all over the audience. Now that was something none of us were expecting, for the first three rows to be a splash zone. It was like fucking

Sea World but with a stronger smell of fish. She then finished her set with the infamous banana trick giving the 3 participants a bite each. The last guy to take a bite didn’t look too thrilled about it but he gave it a go anyway. No doubt he walked away wondering if you can you get crabs in your eyebrows.

Shortly after ‘Sergeant Schlong’ and his ‘girlfriend’ reappeared and we were back to the start. The drinks were done and it was time to go although there was one last show for the audience. As we were leaving the Army guy was balls deep and suddenly started to point towards the audience. The podium rotated until ‘Brenda’ saw what he was pointing at and threw a proper wobbler. Someone was taking a photo. ‘Sarge’ folded his wab up like a deckchair and hid it with his hand while the bouncer came over and made the punter delete the picture. He re-entered ‘Brenda’ just as we left. That was enough for one night.

As we walked back past all the hookers I couldn’t help but giggle to myself at what I had seen. By now the Red Light District just didn’t feel as seedy as I had thought. It was more a sort of strange spectacle to be enjoyed from a perspective of bemusement rather than an odyssey of Eroticism. An experience to say the least, one which we repeated a few times before heading home as there was more fun to be had wandering around laughing at strange looking prostitutes than anywhere else in the city. Definitely something to check out at least once in your life, you’ll certainly get a laugh out of it.

One thought on “Not So Red Hot Dutch”