Once again another Thursday comes around and another selection of local talent has battled it out in the Guinness ‘Our Thursdays’ competition (Play A Gig With Snow Patrol). For  anyone who hasn’t heard, over the past few weeks Guinness have been generous enough to give local talent the chance to compete for a spot playing with Snow Patrol in Dublin for ‘Arthur’s Day’, Thursday 23rd September 2010. In bars across Ireland bands have taken to the stage and faced a text vote to see who will progress to the regional finals.

On Thursday 5th August a special ‘Wild Card’ event took place, in which bands were awarded a second chance. One such gig was held in The Empire where Wookalily (Frockabilly Woo-grass) took on Amberline (Powerpop Rock) for a spot in the Belfast finals.

First to hit the stage were Wookalily, a six piece group with members from Australia, New Zealand and, of course, Ireland. The band is lead by singer/songwriter Una McCann, whose glistening vocals, in the right setting, would stand alone against many of Ireland’s up and coming female singers such as Elidh Patterson, Wallis Bird or Imelda May.

One thing that bemused me was their rather muddled description of their music as ‘Frockabilly Woo-grass’. Let me break that down for you – ‘Frockabilly’, essentially country music by women, although I wonder how the male bass player feels about that description as he seemed to be lacking in the frock department. As for ‘Woo-grass’, it seems to be a rather redundant play on the word Bluegrass which, firstly, didn’t woo anyone and secondly wasn’t exactly bluegrass music either.

One problem I had with Wookalily was their stage presence. Six plus instruments, all huddled together on the Empire stage.  The likes of Ken Haddock and Rab McCullough and their sizable bands don’t seem to have the same problem with overcrowding. Wookalily not only dressed like the Amish but looked like they’d be more comfortable on the last refugee truck out of Bosnia.

I was also very disappointed to overhear the band describe this gig as a ‘rehersal’ from which I inferred the little value they seemed to place on such an opportunity.

With an already crowded Folk Rock/Country scene here I wonder where a band like Wookalily would fit. The music was solemn and not the energised sound we have come to expect from those within the genre. There are so many more deserving talents out there like Junior Johnson, Captain Kennedy, Ten Gallon Hat and Paddy Nash and I would wonder if there is any room for a band such as Wookalily. All these other acts have that special something that entices you to keep listening. Wookalily made me want to switch them off which is difficult at a live gig.

The group were a perfectly acceptable act for a spit and sawdust bar. However let us not forget that the ultimate ending of this competition is a support spot for Snow Patrol and I don’t think that your everyday Snow Patrol fan is going to be interested in bastardized Country Music. 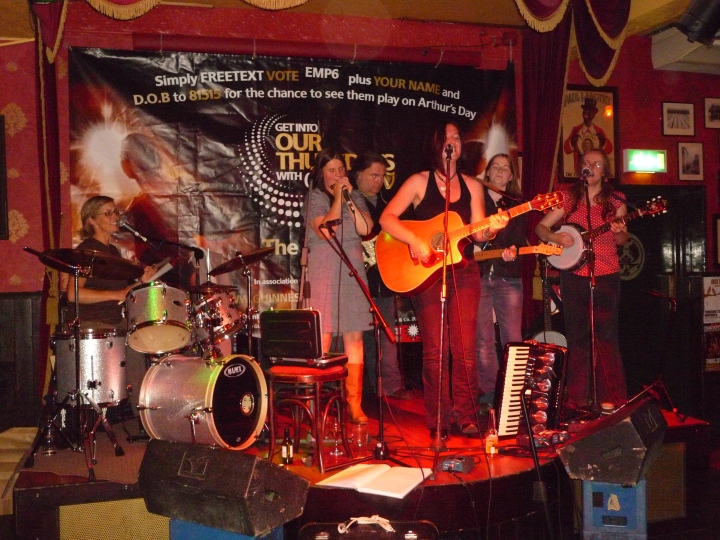 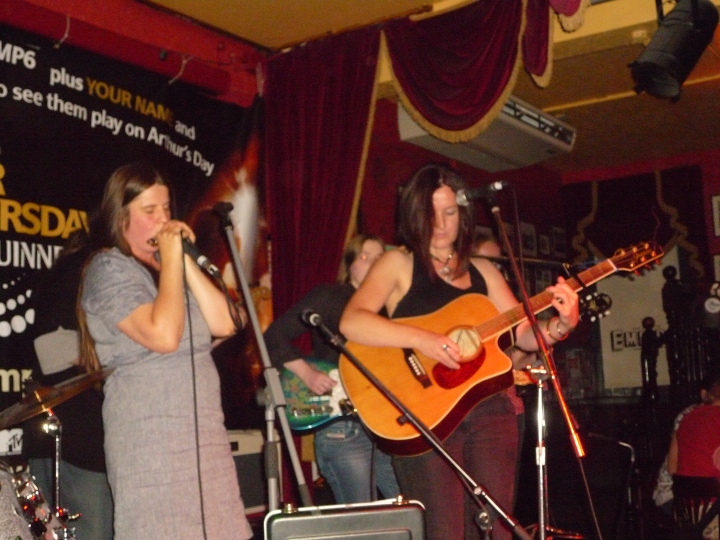 After a short break Amberline took to the stage and not a second too soon as my pint was empty and my feet were shuffling towards the door. Like a Phoenix from the flames, my hope for the evening rose with every note and by the end of the intro to their first song, ‘The Counted’, I was hooked.

Two young lads, Brent Kelly on lead vocals and Ciaran Sloan providing backing vocals and Guitar, immersed the audience in a guitar based, poptastic spectacular. Some might say that the genre has had it’s day, however there was something refreshing about Amberline. The two lads, a guitar and a laptop was all that was needed to create a fresh sound so badly needed in the local scene. It was a strong start for the boys who certainly kept things lively with catchy choruses, the inventive addition of an electronic backing band and the blistering power ballad guitar solos from the talented Ciaran Sloan as well as the enchanting, stadium worthy vocals of Brent Kelly. There truly was something for everybody.

The band went from strength to strength, quickly launching into ‘Invincible’, a bounce along to track that has hit written all over it. It oozed with an addictive sound that had the crowd dancing with hands aloft and singing along before they even knew the words. As if this wasn’t enough we were then surprised with a beautiful cover of Scouting for Girls Number One smash ‘This Ain’t a Love Song’ that allowed singer Brent Kelly to show off his talent, smooth vocals with a rock hard centre.

Amberline made the stage their own with a rocking beat and Brent Kelly’s interaction with the crowd made everyone feel a part of the process of deciding who is worthy enough to support Snow Patrol on Thursday 23rd September 2010. 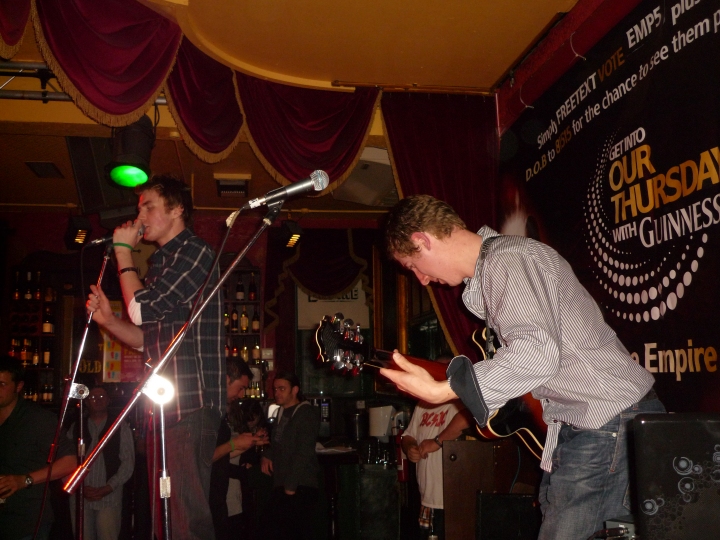 It wasn’t long before it was time to vote. Phones came out, thumbs went daft and it was done. Time for the result.

And the winner is – Amberline.

A well deserved win for the boys who just had that something special that won over the crowd and, in my view, would make them fantastic choice to compliment local sensation Snow Patrol in Dublin on ‘Arthur’s Day’.

So onto the next round it is for Amberline who will face stiff competition as they take on giants Katie and the Carnival as well as Nick Carswell and the Elective Orchestra, live at the Empire on Thursday 12th August at 8.30.

Who wins? You decide. At least you will if you get off your arse and head down to the Empire on Thursday.