On Saturday I did something I have never done before, I entered the Lion’s den. A place I have avoided for ye

ars even as every available empty store was filled with something that would send a shiver down my spine. That evil thing that is spreading around Northern Ireland like AIDS in the 1980’s is Starbucks.

me wrong, I am not here to lecture you on Capitalism. I haven’t avoided the whole coffee shop culture because of some misguided, half baked, post Marxist theory stolen from the internet. It’s because of the pricks that frequent these places.

Back in my University days I was quickly introduced to the idea of whiling away the hours between alcohol in the local coffee shop. Unfortunately an overriding memory from those days sticks in my head. I met a friend of a friend one day in a coffee shop in Botanic. This guy was a walking cliché and was more like something out of an Editorial Cartoon and not someone I believed existed in the real world. He was actually wearing a beret. Oh and that everlasting sign that labels a person as a pretentious knob-end – a Che Guevara T-shirt.

I fail to understand this. How any wannabe Marxist thinks the idea of a mass produced, Fruit of the Loom made t-shirt is a good way to show your distaste for Capitalism I will never know. In my opinion these t-shirts are actually the epitome of Capitalism. Give misguided idiots what they want in massive amounts for a sizeable profit. Stick Che Guevara on anything and sell it to people who can’t grasp the paradox. Anyway, I digress.

After a 20 minute lecture from this guy I tried to explain the irony in his choice of attire and was met with furrowed brow and blank face. He failed to see his own stupidity. After 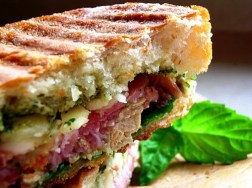 this chance meeting I always avoided such places for fear of being jailed for beating one of these idiots to death with their own Panini.

The other problem I have

with such places is the focus on Fair Trade. Now don’t get me wrong, I have no problem with trying to sort out certain injustices in this world and the exploitation of children in third world countries would be a worthy cause indeed. What annoys me is the fact that so many pretentious pricks use it as some sort of badge of honour when really they don’t give a shit. It just sounds good when following up a rant on the perils of eating meat.

These people throw figures at you and expect some sort of mock shock in return. You can tell me some kid in Africa gets 40p a day to sew trainers. Shock Horror. What people fail to realise is that any figure like this means nothing without context. Without figures such as average salary, exchange rate, cost of living, the working culture of the nation, and age of this ‘kid’ then this means nothing. Don’t quote me a figure. I want to see Pie charts, Venn diagrams and possibly some sort of slideshow presentation before I make up my mind so don’t lecture me on where my teabags come from.

Anyway, after spending some time shopping on a hot day I was persuaded to enter the den of the prick and to my surprise it was filled with normal people. No berets, no Che Guevara, no discerning looks. It was actually…well…nice. In the end my only concern was how to order my Caramel Cream Frappachino and pink cupcake without sounding a bit gay.